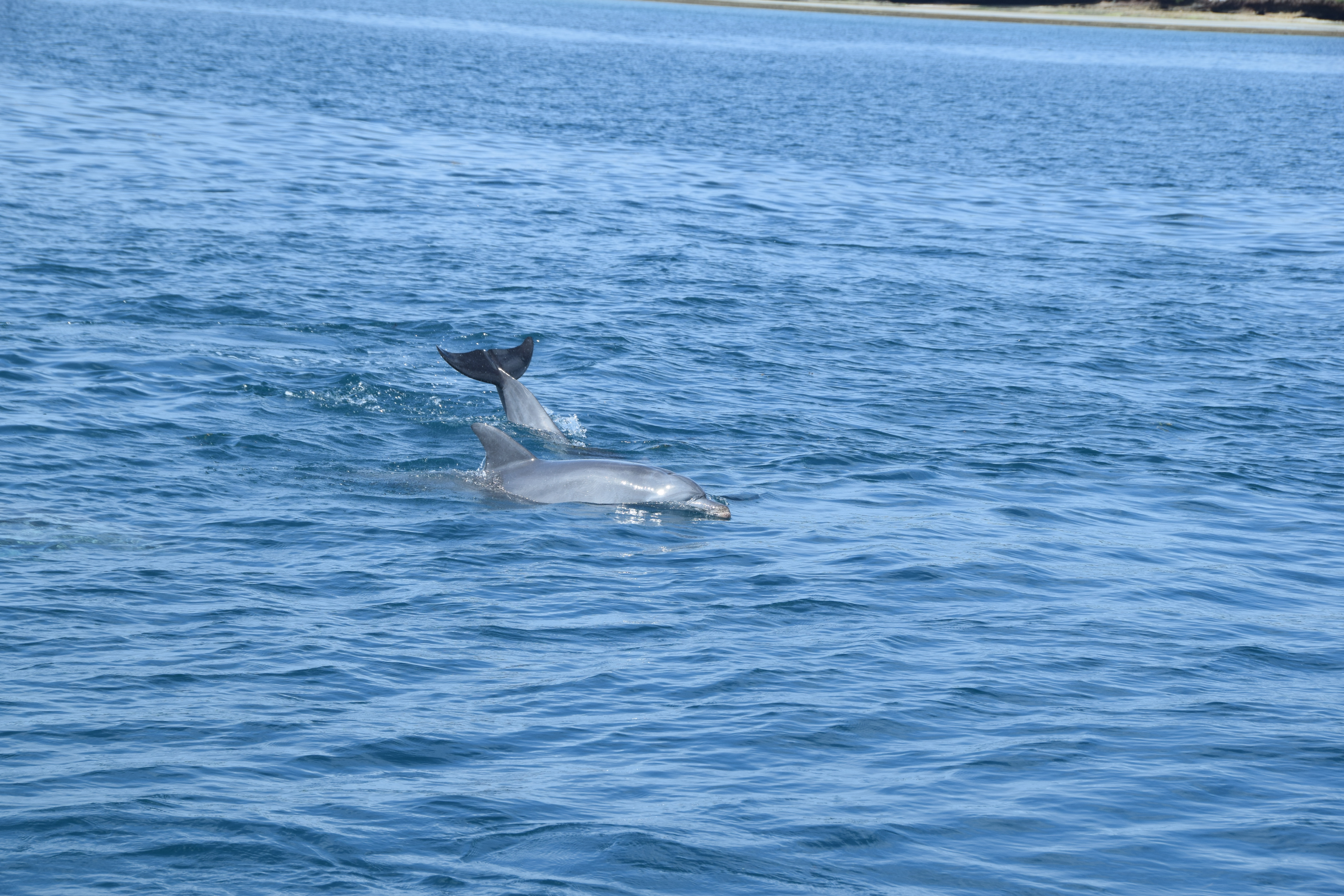 Dolphins of Wasini are part of marine mammals that live in shallow tropical waters all over the world. There are nearly 40 recorded species of dolphins with the higher percentage living in warm temperate oceans and about 5 species living in rivers. There are many interesting facts about dolphins that you may or may not know.

Dolphins are highly intelligent and social creatures that live in large groups which hunt and even play together. Dolphins have been said to be as smart as apes and their larger brain evolution has been observed to be similar to that of humans.

Since dolphins are mammals, they have to occasionally come to the surface of the water to eat or breath. While under water, they breathe through their blowholes to avoid drowning. They are part of the whale family and are  grouped together with pilot whales and orcas. They are mainly carnivores and feed on fish, octopuses, jellyfish and squid among others.

You may be wondering; are there dolphins in Kenya? Or where can you swim with dolphins in Kenya? Well, I have some good news for you: dolphins frequent the Kenyan coast quite a lot. From the North of the shore as far as Watamu – Malindi, to the South as far as Shimoni – Wasini, there are major dolphin spotting locations where you can visit and enjoy a day with these friendly animals.

Dolphins of Wasini and the entire Kisite Marine National Reserve, roam freely in their natural habitat. It is an amazing thing to behold these wonderful creatures as they swim in the turquoise-blue waters of the Indian Ocean.

Some of the dolphins you find here include:

Bottle-nose dolphins live in groups typically of 10–30 members, called pods, but group size varies from single individuals up to more than 1,000. Their diets consist mainly of forage fish. Dolphins often work as a team to harvest fish schools, but they can also hunt individually. They search for prey primarily using echolocation, which is similar to sonar.

The dolphins of Wasini emit clicking sounds and listen for the return echoes to determine the location and shape of nearby items, including potential prey. Bottle-nose dolphins also use sound for communication, including squeaks and whistles emitted from their blowholes and sounds emitted through body language, such as leaping from the water and slapping their tails on the water surface.

Conservation -> Bottle-nose dolphins are not endangered. Their future is stable because of their abundance and adaptability. However, specific populations are threatened due to various environmental changes.

Conservation -> the species is listed in the Convention on the Conservation of Migratory Species of Wild Animals (CMS) and has been categorized as being in danger of extinction throughout all or a significant proportion of its range and CMS Parties strive towards strictly protecting these animals, conserving or restoring the places where they live, mitigating obstacles to migration and controlling other factors that might endanger them.

The humpback whale is a species of baleen whale. One of the larger rorqual species, adults range in length from 12–16 meters (39–52 ft) and can weigh up to 36,000 kilograms (79,000 lb). The humpback whale has a distinctive body shape, with unusually long pectoral fins and a knobbly head. It is an acrobatic animal known for breaching and slapping the water with its tail and pectorals.

Males produce a complex song lasting 10 to 20 minutes, which they repeat for hours at a time. Its purpose is not clear, though it may have a role in mating.

The Humpback whale of Wasini

Found in oceans and seas around the world, humpback whales typically migrate up to 25,000 kilometers (16,000 mi) each year. Humpbacks feed only in summer, in polar waters, and migrate to tropical or subtropical waters to breed and give birth in the winter. During the winter, humpbacks fast and live off their fat reserves. Their diet consists mostly of krill and small fish. Humpbacks have a diverse repertoire of feeding methods, including the bubble net feeding technique.

Conservation -> like other large whales, the humpback was and is a target for the whaling industry. Once hunted to the brink of extinction, its population fell by an estimated 90% before a moratorium was introduced in 1966. While stocks have since partially recovered, entanglement in fishing gear, collision with ships, and noise pollution continue to impact the 80,000 humpbacks worldwide.

Dolphins do not have many natural enemies. Their main threat is actually human beings and their harmful activities. Fishing is a major threat to dolphins. When there is uncontrolled fishing in the waters, causing depletion of fish stocks, dolphins are likely to starve hence negatively affecting their population.

Another major threat is pollution. Dolphins might get entangled in fishing nets/lines (by-catch) and this can lead to the dolphins getting hurt or even worse, death.  Although not majorly, vessel strikes can also be a threat to dolphins. This happens when a dolphin collides with dhows or ships moving in the sea leaving it injured or dead. Habitat degradation, caused by a number of human activities including water pollution through toxic wastes disposal also negatively affects the life of dolphins and other marine life.

The dolphins of Wasini are not endangered. The Kenya Wildlife Service protects the Kisite National Marine Park by controlling entry into the park and works hand in hand with the Kenya Fisheries to control fishing so that the dolphins do not lack food.

How a typical dolphins of  Wasini safari looks like

Tour companies like Coral Spirit pick clients from hotels, Resorts, Holiday homes and Villas in Diani south coast and Mombasa in north coast and take them for day trips to kisite marine park. The drive from diani beach to the fishing village of Shimoni takes about an hour or so. Once everyone is cleared by the Kenya Wildlife Service (which runs the conservation of the marine park at Kisite), you will walk down the jetty and board the dhows which will take you around for dolphin spotting.

Boat captains with years of experience will track the dolphins and soon you will be following them around. If you’re lucky, the dolphins will even “put up a show” where they jump in and out of the water and sometimes tap their tail fins hard on the water surface.

Although dolphins are generally known to be friendly, it is important to note that the dolphins in wasini have not gone through any programs like how to train a dolphin and are therefore, naturally wild animals with instincts to protect themselves and their young ones. With this in mind, there are some things one must not do when near them.

For example, it would be unwise to chase or approach a mother with her calves. Also, avoid actions like shouting or loud banging as a means to attract them as it will likely interfere with their hearing, mess their communication, navigation and locating of prey. Swimming with dolphins in wasini island sounds really cool but unless a dolphin approaches you while in the water – which would indicate that they want to play – do not initiate by jumping or attempting to “swim with dolphins”

The Wasini day trip includes a snorkeling session at the Kisite National Marine park where dolphins may come to play. The park is full of marine life including multicolored, fish hard and soft corals together with beautiful sea turtles. The snorkeling is a major part of the wasini day trip as clients get to test the warm clear blue waters of the Indian ocean and swim among the schools of fish living in this marine conservation. (Bring your waterproof camera and carry home some lasting memories).

After snorkeling, the dhows head to the restaurant where you get to enjoy sumptuous seafood lunch accompanied by local coconut delicacies.

Come and bring a friend for excursions in diani  and shimoni tours so that you can enjoy this and other water tours including the Funzi Island tour,whale shark spotting in Diani beach, deep sea fishing at Pemba channel,  among many other water sports and activities.

Remember you can pay for any of Coral Spirit tours and services especialy to go see the dolphins of Wasini via our bank account that is available on the website (www.coralspirit.com) or you can choose Safaricom Mpesa services directly from your mobile phone.

Do not hesitage to give us a call. We are an expert team and we are happy to talk to you.